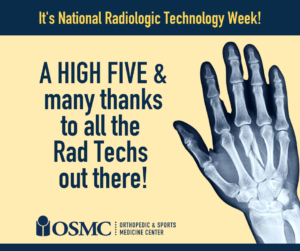 OSMC would like to recognize the important and great work our Rad Techs do every day. They simply radiate positivity all year long!

What is a Radiologic Technologist?

Radiologic technologists are the health care professionals who perform diagnostic imaging procedures, such as X-ray examinations, magnetic resonance imaging (MRI) scans and computed tomography (CT) scans. adiologic technologists are responsible for accurately positioning patients and ensuring that a quality diagnostic image is produced. They work closely with radiologists, the physicians who interpret medical images to either diagnose or rule out disease or injury. For the images to be interpreted correctly by the radiologist, the imaging examination must be performed properly by a radiologic technologist.

National Radiologic Technology Week® is observed annually to recognize the vital work of imaging professionals across the nation. The celebration takes place each November to commemorate the anniversary of the X-ray’s discovery by Wilhelm Conrad Roentgen on Nov. 8, 1895.

Who is Wilhelm Conrad Roentgen?

A German physicist, Wilhelm Conrad Roentgen was the first person to systematically produce and detect electromagnetic radiation in a wavelength range today known as x-rays. His discovery of x-rays was a great revolution in the fields of physics and medicine.

Looking for a career? Be a Rad Tech!

Find out what our doctors are up to and discover the latest orthopedic news that matters to you.

OSMC providers offer diagnosis and treatment for conditions that most commonly affect different areas of the body such as Back & Spine, Neck, Shoulder, Elbow, Hand & Wrist, Hip, Knee, and Foot & Ankle.